Anyone still lurking about here?

More importantly, any concept artists/3D modellers lurking about here?  I might have a wee jobby for you, if you are a lurkery concept artist/3D modeller or if you know one who would be interested in doing concept art/3D modelling for a hot-ass indie game developer's current project.

Hit a Dragons up, why don't you.

Also hi. *waves*  Hope you're all well in your respective corners of the globe.

The last part of 2013 around these parts can frankly GDIAF.

But last night I collected an endearingly drunk man from a pub near his work and we drove an hour north of Perth for his first true blue rodeo.  We ate greasy french fries with gravy from The Lamb Van and drank bad coffee and watched some cowboys and cowgirls git 'er done.  The Mans was delighted by the entire bogan spectacle, asked relevant questions, and smiled at me fondly while I plotted to steal Wade McCarthy's impossibly glorious steed.  We both wanted to steal the stocky little chestnut barrel racer who galloped like he was trying to drag the ground under him, and had the kind of frantic face that screamed:  GIVE ME VICTORY OR GIVE ME DEATH.  Oh my gosh, he was earnest.  So hilariously earnest.

We were home by midnight, where he started the new year by adding his house keys to my key chain.  I like them jingling around on there.  They sound nice.

This guy just gets me, people.

I hope you all had a similarly wonderful evening, and 2014 finds you a happier, healthier, wealthier human being. 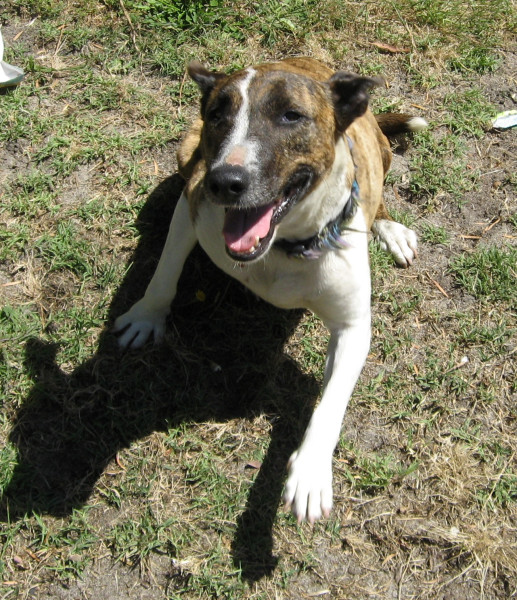 Left us this morning in direct contrast to the way she lived her life - gently, softly, without muss or fuss.

Neffi, you were a problem child from day dot, and at least forty of my grey hairs are the result of you. I rebuilt your shattered leg, appeared in court on your behalf, and bailed you out of jail twice. You ate everything from bricks to shower curtains, and dug enough trenches in enough backyards that I should be a certified honorary landscaper.

In return, you brought a maelstrom of laughter, wtf, and devotion to my world for over twelve years. Life just will not be the same without you.

I don't even know why I find this so funny, but I'm still laughing about it six hours later.

The guy was in PURGATORY.

WHY DO YOU DENY ME THE WHUMP?

Hiatus is almost over, I see.

I'm in the mood to be optimistic about things SPN, and I'm unexpectedly not on nightshift like my stupid iPhone told me I was.

Anyone got any links to some good old-fashioned gen Dean!whump?  I don't care if it's old fic or new fic or whatevs.  I'm just trying to stir the fic!loins here.  Stoke the fire, so to speak.  Probably short is better, because I have the attention span of a gnat this week for idek what reason.

This country is fucking awesome.

Do I have any Thai flisties? YOUR COUNTRY IS FUCKING AWESOME.

Posted via LiveJournal app for iPhone.

A Dragons fell off horse!Sam last Wednesday and I've royally screwed up my back and hip.  Sixty billion x-rays and ultrasounds later, I'm told I have a grade 2 tear of the gluteus medius muscle near where it joins the ilium.  So basically I fell off my horse and ACTUALLY busted the right-hand top middle of my ass. Between the squished nerves and the hip pain, I think there are exactly zero positions in which I can lie, sit or stand for longer than ten minutes without wanting to weep or punch someone.

I take back everything I did to Dean Winchester's hip when I was writing The Lee.  DEAR GOD, I'M SO SORRY, DEAN.

Anyone got some miracle cures for nerve pain?  Does acupuncture work?  Ideas?  Anyone?  Bueller?

A Dragons is in need of the comforts. Can any of you lovely ladies point me in the direction of some quality Holmes!whump? Extra points for A Game of Shadows based.

Posted via LiveJournal app for iPhone.